Had one of my dreams where I was auto-awakened at a specific moment so as to capture a message I was apparently meant to retain.  The message was about building from the ground up, using Light.

Or possibly, about being built–or rebuilt–from the ground up, using Light.

So in the first version, I (we) would be doing the building — with Light, which might be interpreted as creating consciously with the potentiated new galactic photons cascading into our planet now, possibly supercharging any creation in ways we’d have to see/experience to understand/appreciate. We’re in a new prime energy here!

Or it could mean building/creating with
the Light of awakened, intentioned consciousness as opposed to just letting life be created by passive default.

“From the ground up” could be referring to anchoring these new energies via our creations.

In the alternative version of my fuzzy message recall — pointing to having an apparent remodel done to me/us, from the ground up, with Light — actually sounds strikingly like what kundalini does. I refer you to the book Kundalini Rising: Exploring the Energy of Awakening for more on this idea (also other posts in this blog).

Or, the remodel w/Light is re: the incoming “new earth” era.

Any way I look at this, I find the idea of building with Light (or even being built or rebuilt by Light) an inspired and inspiring notion. I’m very glad I “caught” the message. Brief, but — to me — significant. Perhaps by turning this little gem around in your mind to explore its various facets, you’d find it something of value to work with, too.

Maybe you’d see something altogether new!  ~Which in these times, would be well and good and possibly quite helpful.

They are prolific; they turn up en masse at events of a mystical/spiritual nature in particular. My current grok re: orbs is, they are nonphysical beings of some sort, whose purpose is to gather information as silent witnesses… perhaps to return to their “source” to upload their findings, eventually.

Anyone for whom orbs have been in their ORBit can tell you they range from little, “blank”-looking balls to much larger, rich mandalas of white light.  In my hypothesis, these more complex orbs have been gathering information (via passive observation) for some time. Perhaps they are nearing their time of “upload” to the great galactic database, after which they may or may not return for another tour of duty. Whether they are a form of “souls,” or divinities, or impersonal, plasmic recording devices, or ??? … remains unknown thus far, as far as I know!  Comments welcome.

At any rate, in case you haven’t seen this pic elsewhere, here’s a good example of orbs — surrounding David Wilcock (divinecosmos.com) and don Miguel Ruiz (miguelruiz.com) at a conference last week in CA. And this is a cropped photo; if you were to see more of the room, you’d see many more orbs filling it! 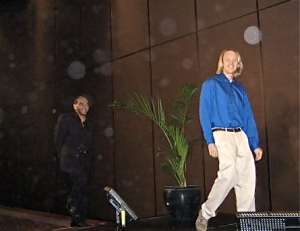 Here I am again with the Osho Zen Tarot… and again I’d like to share with you because this is a valid message for us all, perhaps in particular those experiencing a form of  ‘existential crisis’ currently, or questions regarding the matter of “home” — as am I currently. 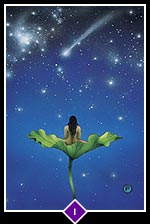 You are not accidental. Existence needs you. Without you something will be missing in existence and nobody can replace it. That’s what gives you dignity, that the whole existence will miss you. The stars and sun and moon, the trees and birds and earth – everything in the universe will feel a small place is vacant which cannot be filled by anybody except you.

This gives you a tremendous joy, a fulfillment that you are related to existence, and existence cares for you. Once you are clean and clear, you can see tremendous love falling on you from all dimensions.

Osho God is Dead: Now Zen is the Only Living Truth Chapter 1

This naked figure sits on the lotus leaf of perfection, gazing at the beauty of the night sky. She knows that “home” is not a physical place in the outside world, but an inner quality of relaxation and acceptance. The stars, the rocks, the trees, the flowers, fish and birds – all are our brothers and sisters in this dance of life. We human beings tend to forget this, as we pursue our own private agendas and believe we must fight to get what we need. But ultimately, our sense of separateness is just an illusion, manufactured by the narrow preoccupations of the mind.

Now is the time to look at whether you are allowing yourself to receive the extraordinary gift of feeling “at “home” wherever you are. If you are, be sure to take time to savor it so it can deepen and remain with you. If on the other hand you’ve been feeling like the world is out to get you, it’s time to take a break. Go outside tonight and look at the stars.

Pulled a card from the Osho Zen Tarot this morning; got the following. Being something of a natural rebel, I resonated, especially given the context of the times. The Rebel is Osho’s version of the traditional Emperor. I like the torch; it enlightens. The “upsetting force” of a rebel with a cause (peace, light, and self-sovereignty while also transmitting radically inclusive love and forgiveness) is a force whose time has come. We are in the New Beginning… we ARE the new beginning. Claim it, live it — onward ho!

People are afraid, very much afraid of those who know themselves. They have a certain power, a certain aura and a certain magnetism, a charisma that can take out alive, young people from the traditional imprisonment.

The enlightened man cannot be enslaved – that is the difficulty – and he cannot be imprisoned.  Every genius who has known something of the inner is bound to be a little difficult to be absorbed; he is going to be an upsetting force. The masses don’t want to be disturbed, even though they may be in misery; they are in misery, but they are accustomed to the misery. And anybody who is not miserable looks like a stranger.

The enlightened man is the greatest stranger in the world; he does not seem to belong to anybody. No organization confines him, no community, no society, no nation.

Osho The Zen Manifesto: Freedom from Oneself

The powerful and authoritative figure in this card is clearly the master of his own destiny. On his shoulder is an emblem of the sun, and the torch he holds in his right hand symbolizes the light of his own hard-won truth.

Whether he is wealthy or poor, the Rebel is really an emperor because he has broken the chains of society’s repressive conditioning and opinions. He has formed himself by embracing all the colors of the rainbow, emerging from the dark and formless roots of his unconscious past and growing wings to fly into the sky. His very way of being is rebellious – not because he is fighting against anybody or anything, but because he has discovered his own true nature and is determined to live in accordance with it. The eagle is his spirit animal, a messenger between earth and sky.

The Rebel challenges us to be courageous enough to take responsibility for who we are and to live our truth.

A happy surprise graced my mailbox last night as I headed out to share the evening with a friend: my comp copy of the book to which I contributed (portions of) my kundalini story!  I’ve mentioned my struggles spilling my story here months ago… but it’s all a done deal now, and so to those who’ve been asking about it — you can finally check it out!

Kundalini is a phenom that is becoming more and more prevalent in our awakening world.  This book contains much info that will support that process, for experiencers and people in their orbits alike. The new book — Kundalini Rising — is available from Amazon in paper or Kindle editions.

I’ve been unlocking many of the password-protected pages and posts recently, so if something was unavailable last time you checked, you might want to try again.  What can I say — sometimes I feel like shielding; other times, o p e n.

The other day a friend said something to me that I found quite astute. She said, “You really ARE living outside linear time these days! Things don’t seem to have anything to do with linearity anymore to you — they come in thematic waves or batches all at once, with periods of silence in between.”

Her insight impressed me, because I AM all about “kairos” currently. Kairos refers to the unfolding “now,” in spontaneous response to the immediate flow of energies. It is all about synchronicity and flow, not clocks or calendars or “shoulds” or “have to’s.” It’s a very different way to experience, and does take some getting used to.

Periods of “nothing” are periods of our working (often un- or sub- consciously) in the alchemical void. The void is like the oven, awaiting the ingredients of the next cake we’re preparing to bake. What are the ingredients we fancy? The flavor, the aroma, the texture, the icing that “tops everything”?

Kairos also calls for a new level or quality of responsibility to take precedence in a life. Ability to respond. This way of being doesn’t care about habits or routines, so there’s no … track to get back on. There’s no street-level (by which I mean physical) navigational system to alert you to the next turn. Negotiating the now in its purest form is a new skill for us to nurture… and ultimately master.

It’s truly about being a kaironaut!

I just made that word up but I LIKE it, and got such a buzz by its emergence just now, I’ll be audacious enough here in this kairotik now to predict that it will be a word I’ll be using and we’ll all be hearing with more frequency (double entendre intended) in the days to come.

When resonant energies come (or are called) into enough power and focus, an event transpires. In the age we have upon us now, our “resonant energies” (or resident thoughts and feelings) are pulling manifestation molecules through the transdimensional plasma into 3D actuality at the speed of light.

Important to keep the third eye on the prize, young Skywalker. 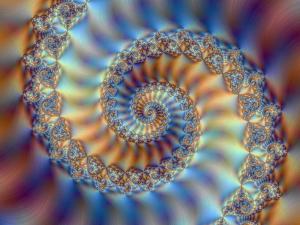