What a night of dreaming! All I can remember to report — because it felt significant so I’m inclined to share it — is a vignette about being overwhelmed by a flood of miracles! Such a problem to have!

In the ‘dream’  (much dreaming is really  learning and adventuring on the inner planes), I experienced an overwhelming flood of energies flying through me, from the top (crown chakra) down (into the physical plane). This was truly like an energetic tsunami, though it wasn’t at all “subtle” or however else you might imagine “energy” to be. 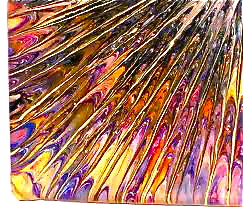 What I saw was cascading in ‘forms’ and ‘chunks’ of energy (not physical matter; think ‘holograms’) … it could well have been geometric formations, I’m not clear on this because it was seriously overwhelming—a blur of accelerated activity.

As I was experiencing this, the message came in from somewhere that a TORRENT OF MIRACLES was INCOMING… to such a degree, with such UNBRIDLED INTENSITY, that it will actually be difficult for us to adapt to — assimilate — here at street level. This wasn’t about me personally, but rather US collectively.

And I was having difficulty just “hanging on” during the bombardment of all this stuff pouring down around, into, and through me! Imagine a truckload of… hmm… toys, like blocks and gadgets and instruments, etc… being dumped on/into you from “above” somewhere. There is a self-protection reflex that kicks in! If something comes on/in too powerfully, there will be a degree of recoiling, trying to figure out how to, you know, survive such a massive influx of…  whatever this is.

I will likely have more to say on this but meanwhile this poor post has been blown off my blog (typical Mercury Retrograde manifestation!) and I had to go to much trouble to find a former version of it to start a new effort with, here.

What you see above is a ‘start’ of a post I wrote almost a week ago, which vanished after I wrote about 85% of the whole thing. As most writers know, there’s a ‘zone’  for writing. I was in it THEN. Now … notsomuch. So hopefully the inspiration will come to explore this idea a bit more in the near future. Meanwhile I wanted to get the gist of it UP HERE before it vanishes again from WordPress!