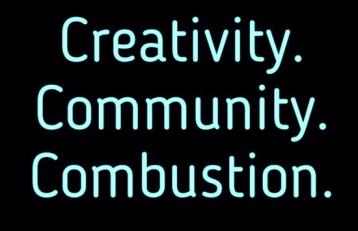 I can’t say I fully understand what just happened vis-à-vis the eclipse we just experienced the other day, but something really knocked me for a loop!

(Sidebar: this graphic isn’t a  great match for the post but I got a kick out of it so… voila! If I could edit it, I might change it to creativity/combustion/confusion, or maybe combustion/chaos/creativity! )

(Sidebar #2: video of Lisa Brown’s perspective re: shifting from the old matrix to the New included below.)

So: on August 21st (day of eclipse) we had a big black cloud roll right over the line-of-sight of the “show” the moment the eclipse was starting, and it stayed there the entire time, producing a rain shower for good measure. All around/above this sudden cloud were chemtrails. So my viewing of this event was by way of what I saw online, which, I must say, got totally bizarre.

I tuned into NASA’s (presumed) “eye on the sky” and witnessed something so weird I can’t imagine what was going on – both in the sky and at NASA – to be feeding us whatever that was they had going on.

So the event itself was strange in various ways.

In the aftermath, I felt my own energy wane pronouncedly. On the afternoon of the eclipse, as many others have reported, I felt wobbly and spinny. The next day was when the drain became seriously noticeable – I’d estimate about a 60% drop in my ability to maintain a balanced flow of life force.

But Wednesday brought the big dip to an empty tank, when I couldn’t seem to string two words together (total brain drain) or stay vertical beyond quick trips to the kitchen or bathroom. A total eclipse of my personal solar/soular power source seemed to be playing out…

That night (Wed), kundalini activated in my spine – a sweet and gentle writhing energy. K can come on very powerfully but this was a pleasant dance-like flow. Thursday and yesterday several shakti fonts occurred, meaning the sensation of sparkly energies flowing up and out the crown like a fountain. Both the writhing and the “fonting” hadn’t happened in quite a while, so the timing (apparently eclipse-related) was interesting.

Shakti fonts are something I generally associate with moments of extreme psycho-emotional engagement or inspiration. But these came on for no discernible reason… leading me to wonder if my energy body was undergoing a reset of some sort – i.e., a complete (cleansing?) drain followed by gentle kick-starts courtesy of effervescent kundalini. Pristine energy.

However, at the same time I have not been sleeping. Big issue. For weeks this has been going on, throwing what from my POV is a monkey wrench into whatever this is that’s been happening, or trying to happen, in my personal system. If I were energetically elevated enough perhaps this wouldn’t matter (?), but I’ve been feeling chronically exhausted… a strange state of energy-related affairs here. A confusing time!

More to share soon re: this experience of switching tracks from one reality, or realm, to another, but for now will leave you with what I found to be an interesting flow-of-consciousness by Lisa Transcendence Brown on exiting the old earth matrix.