This following video/audio is from Aluna Ash, who posts quite often about her clairvoyant impressions on youtube, and over the course of this year has garnered a sizable following.

I share this, as always, to add to your personal “mulch” of clues about a pending quantum leap event (which includes shedding density) – should you choose to entertain it.

My personal impressions about this source are fairly neutral. Many things that she “sees” have been discussed for years, even decades, about a planetary ascension event. She now feels this event is coming “very soon,” sooner than she previously perceived.

I’ve anticipated all this for so long, and had so many visions and experiences myself along these lines, that my position now (like so many others, I know!) is kind of like “Yes, yes, let’s GO already!”  :)

I’m also going to share an odd and possibly connected – or possibly not – experience I had last night. Aluna’s assertion that everyone will “see Light” prompted me to share this.

So: I was conversing with my friend Allison when I started noticing an odd effect wrapping around the left edges of my visual field that I’ve never experienced before.

It started as a small oval with  geometric, faceted, prismatic features that appeared to be firing or flashing light from them. My first thought was that my glasses needed cleaning. 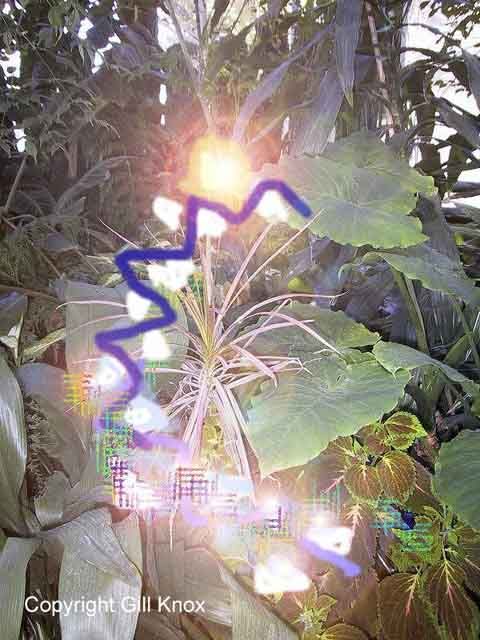 But it turned out not to be the glasses, nor was it apparently about my eyes at all. In fact, when I closed them the distortion was still there, in darkness as opposed to overlaying whatever I was (trying to) see in front of me.

It became intensely pronounced quickly, and I wondered, am I stroking? Is some kind of portal opening in front of me??

I mean, this was a complete unknown. And extreme.

Then suddenly the notion of a migraine aura came to me as I was trying to describe what was happening to Allison. She immediately recognized it as an ocular aura (which often precedes migraines) and advised not to worry about it, it will pass. And, after about ten minutes, it did. No pain involved.

I’ve had migraines for decades. Lots and lots of them. Never before have I experienced an “aura” like this. As it happens, I did have a migraine yesterday and the day before (response to several days of “hurricane preparations” and all the associated stress I suppose) but it was already gone when this happened. A post-migraine aura? These typically occur before a migraine hits.

You may be well familiar with this aura phenom, especially if you get migraines. Why did I have this now? Allison has never had a migraine, but once had this experience. I find it beautifully synchronistic that I just happened to be talking with her when this happened, as she provided instant illumination re: what it was!

Anyway, it came to mind while listening to Aluna Ash talking about how people will begin “seeing light.”

Any possible connection between “ocular auras” and the increasingly photonic environment? Will these odd auras become more common? Ruminations…  :)

Here’s Aluna’s video, followed by a transcript of what she says about an imminent (dare I even say it) Event.

Blessings on you, Whitehawk

It’s coming very very soon. The time of the Event is based off of how well we integrate the transmissions we are receiving. But this is midway point of phase 2, there are 3 phases of the closing cycle & it is “speeding up.”

The ships are in position, holding light as the stargate transitions so we are able to withstand the stargates transition. The transition is speeding up. They have to be there for us to survive. The only ones staying on this planet are the ones merging to 4th density. 4D not 5D. New earth is a 4th density planet. They are holding the light back until we increase in vibration high enough.

💥💥 Dark forces will be a massive pain in the ass right now. Set your boundaries and SAY NO. God/your soul/source will tell you what is not uplifting for you based off of how it makes you feel. It is not ego to stand in your authority & say no. That is listening to your spirit. Lightworkers or anyone speaking truth deals with these attacks.

We are also staying on this planet after the Event, unless our soul contract has decided for us to leave prior, during or after. Just different.

Also saw Soul groups and twin flames coming together immediately I’m not even sure how it happens (by merging into new timeline- there are several) but it just happens, to start guiding others to adjust to the new shift in Consciousness and the new technology & system changes. They (nonphysical beings of Source) want me to say they are “put into place and ready.”

Grid system will go down in different locations. This is an aided event. I saw 2022.. I was teaching or something. There was New technology.. I think I was seeing out after the event w/2022. Feels like its coming very soon based off them saying “they’re ready and in place.”

The light is so damn bright. It’s beautiful but bright where you can’t see anything else but white light. Feels like love and then scary for many. I didn’t like the feeling of knowing who I know that is leaving, that’s the only neg thing. End of October 30, 31st is significant and November 11th (11/11/11) & 16th 2018 are very significant too.

3 comments on “Accelerating Toward A Quantum Leap”