Curiously, yesterday – Mother’s Day here in the US – I found myself fully immersed in the realm of the Father. As in God the ..

I’m endeavoring now to lay out this mind trek, as maybe it will serve. 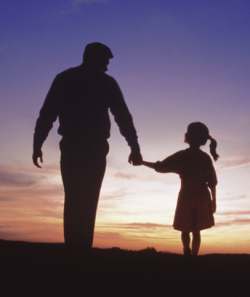 So, personally speaking. my associations with my own father lean toward troubled, antagonistic, painful, etc. He was a difficult man… probably a bit bipolar; one never knew whether he’d be cracking jokes (often of the “put-down” variety), or eviscerating you with a verbal explosion or even a mere penetrating look.

In other words, he was a wounded, frustrated soul like everyone else. He had light, animation, playfulness, creativity… and also a lot of anger. Being the family empath, I sponged up much of those low-vibe, esteem-annihilating energies in my youth, and lately they’ve been clamoring for attention/healing/clearing once again.

Yesterday, I ventured into territory I hadn’t visited to much depth in a while, being The I AM Discourses, which were dictated by Saint Germain circa 1930 and published as a series of books. My neighbor, bless him, loaned me his treasured copy. I was amazed how “current” the topics are, even if the language seems a bit dated. The “Great White Brotherhood” (a group of advanced souls which includes Saint Germain) produced volumes of mystic wisdom that spoke to me when my spiritual quest really took off in my 20s. It felt like “home” to revisit it in this I AM volume.

Soon, I found myself online, stumbling upon a website that hosts a series of “letters” dictated by Christ, and Lo! I was completely drawn in by this material, which can heard via a complete set of audio files for each letter as well as read, all offered freely here: http://christreturns.org.

This “Christ Returns, Speaks His Truth” content would be fascinating imo to anyone interested in the soul who “sponsored” the Jesus aspect of itself 2,000+ years ago, whose goal in this material is to tell his truth re: all the New Testament accounts told about him – which he does in meticulous and fascinating detail. He also denounces all religion as having lost the original intent in favor of human interpretations or agendas, and discusses the problems that prevail between the sexes.

This series of letters (from what I’ve experienced thus far) could be called “Christ Loosed!” or Christ unleashed. This world could use some unleashed Christ energy about now to up-shift into the next “project” – an ascended New Earth. I know it’s here; it’s just taking a while to be fully received.

The woman who channeled these letters goes only by Recorder, as she has no ego attachment to being credited with anything. I’ve listened to and read – sometimes reading along with the audio, sometimes just listening – three letters thus far (edit next morning: now four), and look forward to continuing. I find it illuminating and healing, and makes the man Jesus feel very here now as someone who didn’t “have it all together” until one day he did. Accessible, relatable, wise.

Christ, when speaking of God, has always referred to God as Father. Steeping in this material brought up my own father stuff and the realization that I have much more to heal in this area of my psyche and heart. All my life I’ve been in and out of difficult constellations with male power. I’m told something in my natal chart even shows this as a primary challenge. I could go on for days re: all this but this is just a blog post! Suffice to say, the whole issue of patriarchy (and patriarchal entitlement re: women) has been such a head-banger for me, it’s made for a lot of hardship, and ultimately I began withdrawing from it altogether as a kind of survival mechanism.

Meanwhile, I’ve been “surviving” in a reduced capacity… much of which is connected to this core issue draining me quietly yet persistently in the background. So, in this moment a least, I’m making a point of focusing on this with gentleness and compassion – for myself, my dad, all the “alpha males” I’ve encountered along the way, and the patriarchy en masse – in this life and others. It’s a theme whose time has come, personally and collectively, for healing as the Divine Feminine steps up into true equality. And, as Christ explains in the letters, instantaneous healing is within every human’s capacity to accomplish. We just have to know it.

Stop thinking and playing small, and BE the conduit. You have what it takes.

My new favorite phrase, thanks to the series Dispatches from Elsewhere, is divine nonchalance. It can be an easy flow if we let it be!

So in this regard, in this now moment, I am “about my Father’s business.”

And, you know how songs can come to you that have no connection to the topic at hand… but suddenly speak to it in an unexpected way? For me today it was the Beatles’ “Got to Get You Into My Life”! Whoda thunk? It’s primarily a McCartney creation that we assumed was about a girl, but turned out to be his love song to marijuana! Ha!

Today tho, for me, it’s an energetic love song to The Father.

I was alone, I took a ride
I didn’t know what I would find there
Another road where maybe I
Could see another kind of mind there
Then I suddenly see you
Did I tell you I need you

9 comments on “Did I Tell You I Need You”