I just stumbled upon a bunch of free episodes of Gaia programs on (subscription supported) gaia.com. I included the link to them below. Watched the first one in the lineup, about the Enki/Enlil Sumerian creation story – an interpretation (many believe the truth) of the Biblical Garden of Eden myth.

Enki & Enlil were the sons of Anu, the great ruler of a galactic civilization we know as the Anunnaki (“children of Anu”) whose home planet is the mysterious Nibiru, which travels a lonnnng elliptical orbit that passes right through this solar system approximately every 3600 years. Anu dispatched these two sons to Earth (“giant gods from the stars” by earth-dweller standards) to establish a new domain for the Annunaki to develop and dominate. 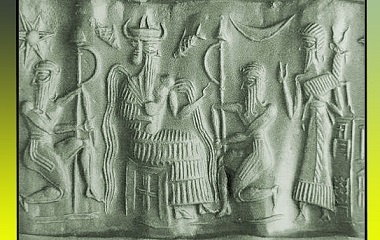 Enlil’s MO was to use violence to break the “lowly beasts” (primitive humans) into becoming slave laborers to mine gold, build Anu’s new empire (for Enlil to rule), and otherwise stay out of the way.

Enki, on the other hand, focused on genetically enhancing the primitives with highly evolved DNA to produce an evolved, peaceful, and productive race.

These two opposing motivations caused much conflict between Enki & Enli, and much chaos on Earth.

Enlil is said to so resent Enki’s efforts to bump human evolution and abilities up a few notches that he, the wrathful Enlil, brought on the event we know of as the Great Flood, intended to clear the planet of all evolving sapiens – and everything else while at it, what the heck, only a planet loaded with life! Enki, meanwhile, provided warnings and blueprints for an ark that would save at least some of his beloved higher-consciousness humans (and other life forms) to re-populate the planet when the water receeded.

Oversimplified of course but this is the essence of the situation as I grok it. Also, some believe the Enki/Enlil roles are the reverse of mine, but of course – they are mistaken, ha!!

I’ve a long-held interest in Enki & Enlil… and sort of identify (just occurred to me here) as “an Enki girl in an Enlil world,” meaning, enlightenment – not force/brutality – is the preferred (and ultimately the only viable) way forward (Enki’s hope & plan for humanity). Yet the powers that be in this world continue to forcibly maintain Enlil’s dark preference for bondage/control/opposition/punishment… In other words: loosh (energy of fear & suffering) for himself and his ilk to feed upon.

Any of this ring any bells, regarding our current circumstances?

I believe (at least I tell myself!) we’re now witnessing the last gasps of this entire Enlil legacy that has wreaked endless havoc for hundreds of millennia. The perpetual keeping down of humanity presents the challenges from which we will rise and release ourselves, to usher in the dawn of peace.

Or – perhaps our ascent is into a more refined frequency in which peace already IS, while the denser realms of 3D continue to harbor overwhelmingly negative forces, for further “learning experiences” to those who still need them.

Anyway, check out the freebies linked below if you’re curious enough to peruse spiritual/cosmic/ancient mystery themes. This page features George Noori’s ‘Beyond Belief’ and a variety of ancient mysteries/civilizations programs, among others. There are likely other free programs grouped elsewhere on Gaia that I haven’t seen. Who knows, you may end up subscribing, as I have on and off for years.

How ’bout we live the Light as best we can and leave all the blood sport in the rear-view.

PS! I haven’t blogged in quite a while, and have “lost” the categories and tag functions. I actually managed to begin begin tagging at one point, made a goof, and now tagging isn’t where I found it in the first place to edit goof. Have never seen ‘categories’! Put in query to WP help. Meanwhile, kinda hangin’ here… w/out those features. If anyone can direct, big gratitude to you. W

6 comments on “Enki Girl in an Enlil World”