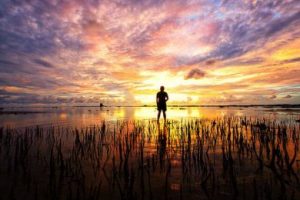 There is a type of loneliness that transcends all others. It isn’t born from lack of company, and doesn’t share the joys of an inner rich world that comes with solitary introversion. Nor has it anything to do with depression, but rather, this kind of loneliness is a spiritual affliction. This loneliness brings feelings of emptiness, of having nothing, and having an extraordinary uncertainty in everything.

This feeling is a rare experience that comes to a person who has seen too deep and too much. Yet it is the beginning of what I call the process of Involution. These people have become aware of the unreality of their lives. They become increasingly concerned about their lives which bring them pain, yet they still aren’t sure of the source. To them, the ordinary structure of society loses its values as they realize the fictitious nature of this matrix, this same illusional matrix where they had been projecting all their hopes and desires. If what they thought was real in this life turns out to be false, then all the ambitions and aspirations they wanted to accomplish in it are lost immediately, leaving them with the questions: Who are we and what are we doing here?

These questions are the unconscious cause of that spiritual void. We constantly escape them with all types of distractions: with movies or books, careers or social trivialities, libidos or egotistical pursuits, recreational, religious or patriotic fanaticism.  We do anything but choosing to be alone with ourselves and having to face these questions. 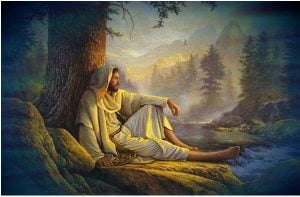 These questions, and these feelings of unique loneliness that amount to the Involutionary experience, have been the forces behind every wise man, and every prophets pain. There is a pattern in the history which shows us that these spiritual outcasts have experienced the very same thoughts and feelings. Born into civilized societies, they reject its values of material well-being, egotism and escapist behavior to retreat into solitude. When they return, it is to teach the notion of world rejection, preaching spiritual intensity above physical security.

For instance, Buddha’s enlightenment came while meditating on the banks of the Nairanjana river as a culmination of long reflection upon the human condition. Jesus, according to St. Matthew and St. Luke, spent 40 days in the wilderness undergoing temptation by the Devil before returning to proclaim his message of repentance and salvation. Muhammad during the month of Ramadan, withdrew each year to the cave of Mount Hira, where on one such occasion he claimed the angel Gabriel appeared to him revealing God’s wishes for humanity.

Moses chose to be a shepherd in a desert where few people were to be found and later spent 40 days and 40 nights in seclusion in Mount Sinai with the sole company of the ‘Lord’, descending afterwards with tablets of what he had learned. St Catherine of Sienna spent 3 years in isolation in her room in the Via Benincasa, during which she underwent a series of mystical experiences before entering an active life of teaching and preaching.

In solitude, they all thought, analyzed and ‘descended into themselves‘. We could say that they found God dwelling there, or they discovered with greater clarity the message they had brought with them at birth.

TOO DEEP & TOO MUCH 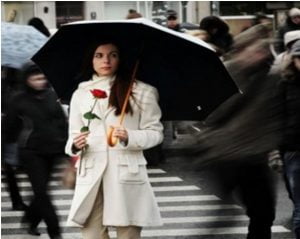 The prophet is man of greater spiritual integrity than his neighbors.  He finds their laxness revolting, and feels impelled to tell them so. These people who have experienced such unique loneliness have awakened to chaos and see the world isn’t rational, and not as orderly as they once thought. They feel a distressing need to tell the truth at all costs, because otherwise, there is no hope to restore order.

These prophets saw that the society we live in is nothing more than a contrived illusion where we blindly create our own sufferings. That the notion of ‘countries’ is merely a creation of the mind.  There are no imaginary lines that separate the borders. That egotism and respect is a false relative identity.

That your name, nationality and beliefs aren’t you – you were simply taught them. That what we call love is less like unconditional love than it is a conditional neurotic dependency. And that money is nothing but colorful symbolic pieces of paper to motivate the social herds into labor, with the delusions of freedom. Most of us are driven by ambitions of achievement, and when all this is taken away upon realizing there’s nothing to achieve, we’re left with the Ecclesiastical dilemma: ‘Vanitatum Vanitas,“ or, “Nothing is worth doing.”

This gives us a new perspective of ‘sinful’ behavior. No matter what religion, being “sinful” has nothing to do with being either “good or bad.” Rather the notion of “being sinful” is a way for these prophets to try and control or stipulate how much escapist distraction we absorb ourselves in. Adultery, gluttony, drinking, pride, greed, idolizing gods and envy are all forms of desiring a status, activities that keeps you occupied and distanced from the pursuit of entering into the depths of your void.  Many understand this practice of entering into the void as a form of mysticism.  But the word ‘Mysticism’ originates from the Greek word “MUO” meaning: “to shut the eyes or mouth”, i.e: to look within. “MUO” is closely related to “MUEO” meaning: “to initiate into the mysteries.” 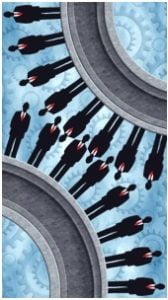 Imagine this. There is a large machine situated on a space of land. You were born as a cog in that machine, and since birth were taught that you were part of this machine. You had a few slim choices of what roles in the machine you wished to function as, but this was as far as your freedom reached.  You can compare this to modern day life.  There are some cogs which are more important than others for their functions.  They are highly respected by the other cogs who aspire to be respected like them someday.

However, in their free time these cogs rest and do all kinds of superfluous things to distract themselves from the truth of their situation: that they are trapped in a machine-prison. But one day, you stop and re-evaluate how meaningless you feel in your functioning and begin to awaken the desire that you want to be free from the machine. You suggest this to the other cogs, but they respond: “Free from what?  We ARE this machine!”

The first two questions that come to you after realizing you’re not the machine, and can be liberated from it are:

This is the beginning of the immensely fulfilling process of Involution.

Those questions are too complex to deal with in this article, but I will go into them in the future. For now, here’s a passage from one of these awakened cogs. This is what Nietzsche has to say in his book, Thus Spoke Zarathustra.  It’s just too appropriate to leave out:

‘He who seeks may go astray. All solitude is sin,’ says the herd.

And long were you yourself of the herd.

The voice of the herd still lingers in you, and when you shall
say: ‘I no longer have a common conscience with them’, it shall be a
grief and pain to you.

You call yourself free? I would hear of your master thought, not
of your escape from the yoke.

Free from what? How does that concern Zarathustra? Let your eye
answer me frankly: Free for what?

…a day will come when loneliness shall weary you, when your
pride shall writhe and your courage gnash its teeth. In that day you
shall cry: I am alone.

A day will come when you shall see your high things no more, and
your low things all too near; you shall fear your exaltation as if it
were a phantom. In that day you will cry: All is false.

There are emotions that seek to slay the solitary; if they don’t
succeed they must perish themselves. Are you able to be a murderer?

8 comments on “The Awakening of Involution”