A brief mention — the zingy Ja’li messages have been given their own section on this blog. They are now presented in their entirety from the 1st through the 9th message on one scrollable page, and may be referenced via the Ja’li Speaks link at the top of the blog, as well as this direct link here (for subscribers who will see this in their WordPress reader or email):

This is *quite* the synopsis of the human experience here on Earth. I resisted it at first (a hefty numeric display between the start and what for me was the juice had me thinking, eh… maybe not for me?) … but get into the flow of the descriptions of the progression of Veils and this will pull you through to the end.  ox W 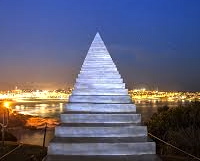 Nearly a decade ago, a dear friend and colleague of mine named Don Harkins authored a wonderfully thought-provoking piece entitled “Slavery and the eight veils.   Prior to Harkins’ untimely death, we discussed this “Eight-veils theory” for literally hours together – and in the end, Don asked me to write a piece about this for his newspaper, “The Idaho Observer.”  He did this, because I had shared much of my research with Don, and we together came to the conclusion that in reality, there were actually NINE veils placed on the human soul (i.e. intelligence), and that spiritual progression and thus a full knowledge of TRUTH would require the piercing of these Nine Veils.

I joked with Don that this topic would take an entire edition of The Idaho Observer, and then it would only scratch the surface.  That was one of Don’s editorial talents – taking a complex story and compressing it to a more readable format.   In memory of Don Harkins, here is the writing we discussed, in as compressed a format as possible.

WHY NINE VEILS INSTEAD OF EIGHT

Any dedicated seeker of truth eventually stumbles upon the incredible symmetry and structure of mathematics, which is especially true in fractal geometry involving the integers 1-9.  For a most basic example, just take a look at these nine equations:

Amazing, isn’t it?  I find it very interesting, furthermore, that all of the great philosophers in history such as Archimedes, Copernicus, Socrates and DaVinci all were mathematicians first and foremost.   I submit that everything from biblical prophecy to DNA strands are built and based on quite simple mathematical formulas and patterns – but I am getting ahead of the story, for understanding the role of mathematics is in itself one of the nine hidden veils.

Consider also the so-called “mystery schools” of antiquity.  In shadowy temples in Sumer and Babylon – the Kabala showed the way to the ultimate “Holy of Holies” – the re-veil-a-tions (revelation, i.e. the parting of the veils) of life, the creation, of God and when embraced in honor and truth, the very Origins of Man.  This involved systematically piercing and embracing 9 levels of understanding or “Truth Plateaus” before finally entering “Nirvana” (or the ultimate unity with God) as depicted in modern “tracing boards”.

Like a giant Sudoku Puzzle board, the human experience we call life truly revolves around the numbers 1 – 9 in so many remarkable ways.  Everything has a place in the system, and everything fits neatly and precisely in the eternal grid of time and space.  This then, is but one definition of Truth – hidden, arcane knowledge that fits completely in the mathematical grid called logic.  Yeshua (aka Jesus of Nazareth) declared this to His disciples: “Ye shall know the Truth, and the Truth shall set you free.”

WHY CAN’T PEOPLE SEE THE TRUTH?

END_OF_DOCUMENT_TOKEN_TO_BE_REPLACED

What I’m about to share with you I experienced four months ago. I’ve had this post started and sitting in draft form for some time because, well, it’s a tricky subject, and in all honestly I’m not clear how it will progress (it being what I’m involved in—in higher planes—in its early stages of emergence), and where we’ll end up with this phenomenon I’m about to discuss.

Actually the recent posts by others have been sort of filling a gap while I geared up to articulate this one.

All I can do is share my experience and all you can do is read it and perhaps ponder the implications as we move ahead into fields of radically different energies.

This out-of-body adventure began as most of them do: I just suddenly realize I’m “somewhere,” as tho some aspect of myself got me there before my awareness caught up to the fact that I was out and about. (There’s an annoying mechanism that seems to cut off much of what happens there from memory here.)

So, “suddenly” I realize I’m seated at a table with a group of others – about ten to twelve people altogether. It seems I’m about to guide them in an experience of some sort. At the moment, we’re waiting – waiting for what isn’t yet clear.

Meanwhile, a man I dated briefly in college comes up from behind me, leans down over my left shoulder in a gesture of greeting. I reach up and stroke his face in acknowledgment of his arrival. (This man – a brief blip in my 3D storyline – has made quite a few appearances in my OBEs. I don’t understand this odd connection, but it’s there nonetheless. I have no unresolved issues re: him… we just seem to have a continuing alliance of sorts in 4D. There are a few ‘unlikely’ people I’ve known who turn up in this state with some regularity. Maybe someday I’ll understand why.)

I’m aware that these people in my group are feeling a bit awkward about what’s soon to transpire – which involves me, along with other facilitators and other groups also gathered nearby (think small-group ‘breakout sessions’ during a seminar) in a meadow-like setting.

Then I realize we’re about to introduce the concept of EROS as an energetic presence on the rise currently, and explore and introduce of the actual embodiment of it here on Earth.

This is a very expansive subject that will deeply influence the experience of being human in the ascended frequencies. I’ll just describe what happened in this very foundational beginner’s session that occurred in the “night schools” that most everyone – aware of this or not – attends while their bodies sleep. I’m feeling a bit tentative about entering this water myself (in attempt to describe this phenom), because I still grapple with the full picture of what it will really be like to have this energy in full swing on a planet where humans are so deeply wounded and distorted in this department.

To continue: my group is now up out of their seats, still obviously a little uneasy. END_OF_DOCUMENT_TOKEN_TO_BE_REPLACED

Well, an article about Kundalini turned up on Huffington Post! The word is getting around. This was written by author Peggy Payne, whose book Cobalt Blue is a fictional account of an artist’s kundalini awakening. I notice her numerous resources on the matter do not include “my” Kundalini Rising so naturally I had to link it in here myself. :-}

Here, deep in the white stuff (snow) and going wacky with cabin fever and terrible internet service. Hope all is well out there… ox Whitehawk

Kundalini: It’s not a pasta. The Sanskrit root of the word means coiled or spiral. The image of a snake piled on itself or two snakes rising is used to depict this reservoir of energy at the base of the spine.

Don’t look for it on anatomical charts, though. It’s not recognized by Western medicine. But growing numbers seek the raising of kundalini and many feel that the experience of kundalini in their bodies is as hard to miss as a hurricane.

The ideal result is variously described as union with the divine, one-ness with all being, super-consciousness.

I’m not one of the awakened, have only felt a blip–more on this later. Yet I’m in the camp of those who are pretty sure that “there’s something to it.” (Total disclosure: my novel Cobalt Blue is about an artist’s turbulent kundalini awakening.)

I was fascinated to read recently the personal accounts that make up most of JJ Semple’s new book, Biology of Consciousness: Case Studies in Kundalini. Semple defines kundalini as:

…A biological subsystem that remains inactive until summoned through meditation or other triggers that, once activated, send distilled sexual energy to the brain via the sexual sublimation process.

A Hurricane of Energy

The awakening accounts are dramatic. From Vikram G.:

One day, at the culmination of the sexual act with my wife, and while the (Indian classical) music was playing, I heard a cracking noise at the base of my spine. It was the most intense orgasm in my life; something ran through my entire being and it overwhelmed me…

I ‘saw’ …everything as vibrations. The music, the streams of water, the glimmering light from the bulb above me.

…I felt an energy rise up from within me, and I began to shake. Not an abnormal condition or convulsion, but a physical energy rocking my whole body.

Triggers cited include meditation, yoga, sexual activity, psychedelics, and the trance of making art. There are many reports as well of spontaneous uprising.

Barbara Hand Clow, author of Astrology and the Rising of Kundalini, suggests that mid-life crisis is a peak time for such experiences.

Kundalini yoga is many Westerners’ introduction to the term. This practice, and arguably all physical practice of yoga, is designed to rouse consciousness to its highest potential through raising kundalini energy. I wonder whether most of those who attend kundalini yoga classes know this.

Similar concepts appear in many traditions. Chi is probably the best known example; originating in China’s oldest religions, it refers to energy that permeates everything.

END_OF_DOCUMENT_TOKEN_TO_BE_REPLACED 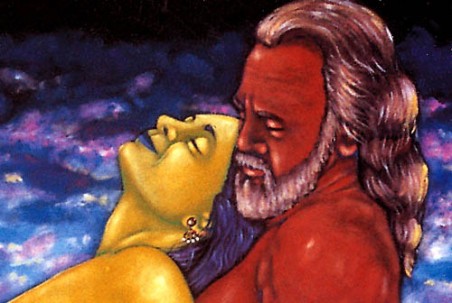 I came upon this mature & worldly couple living a juicy, highly creative & colorful life in Ecuador.

Perhaps you’ll appreciate this interesting pair in a 1:23:00 video interview with the Conscious Consumer Network. There’s much more info at their illustrious website, linked at the end.

I particularly enjoyed the fact that their hair is silver AND they’re wonderfully *luscious* with life!

END_OF_DOCUMENT_TOKEN_TO_BE_REPLACED

Following is a message from Steve Rother, delivered in 12/2014, discussing how we are about to emerge from the transitional portal we’ve been in since 12/2012,  late next month. It’s time we consider how we want to BE in this new 26,000 year ascended cycle, and prepare to be that, because it’s showtime.

The old will no longer hold; we are becoming free to be.

This version of the video has Greek subtitles. What the hey; I’m sympathizing with Greece right now.  :)  I’m rooting for them to rise victorious, free of the oppression and imposed austerity (ech what a word) they’ve endured by the capitalist elite – and I very much anticipate the rest of the world following suit. Greece has led the way in such amazing ways throughout history; I hold their success in the highest light to lead again. This is a big deal, and challenging. But we must have courage and move forward. OPA!